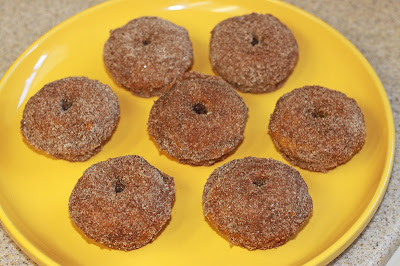 I'm always on the hunt for good recipes I can make for an after school snack. My son comes home starving every day and it's always better for my sanity if I have something ready and waiting for him. He loves donuts and fall is in the air so this was a perfect treat to make. I found this recipe at The Blue Eyed Bakers.

DIRECTIONS
Preheat oven 350 F.  Butter a donut pan and set aside. In a bowl, mix flour, baking powder, salt and spices together and set aside.

In a large bowl (or the bowl of an electric mixer fitted with the paddle attachment) whisk together oil, brown sugar, egg, vanilla, pumpkin and milk until combined. Slowly add the dry ingredients into the mixture and stir until just combined, careful not to over mix.

Using a pastry bag or a steady hand and a spoon, fill each donut cup with the batter.  The donut cups should be fairly full, but not overflowing. Bake for 8-9 minutes, until donuts spring back when gently pressed (if you're using a larger donut pan, allow them to bake for 12-15 minutes).  Turn donuts out onto a wire rack and allow to cool for a few minutes.

While the donuts are cooling, melt butter in one bowl and combine the sugar and cinnamon in another.  When donuts are still hot (but not too hot to touch), quickly dip each donut in melted butter, then coat in the cinnamon-sugar mixture.  Serve immediately.

*Note: If you're not going to serve the donuts immediately, you can bake them up to a day in advance and store them in an airtight container.  Do not coat them in the butter/cinnamon-sugar mixture until just before serving or they may get soggy.

**Makes 12 regular donuts or 24 mini donuts (depending on what size donut pan you have)
Posted by RecipeNut at 12:15 PM

Email ThisBlogThis!Share to TwitterShare to FacebookShare to Pinterest
Labels: Desserts

Hello friends! My name is Jenny. I’m a wife of one, daughter of two, mother of three, sister of four, and recipe lover of countless. The RecipeNut is my place to share with you the most scrumptious of my findings. I only post the ones I'd make again and again. If you like what you see, follow me on Pinterest at The Recipe Nut!